Calves on their Way to be Veal 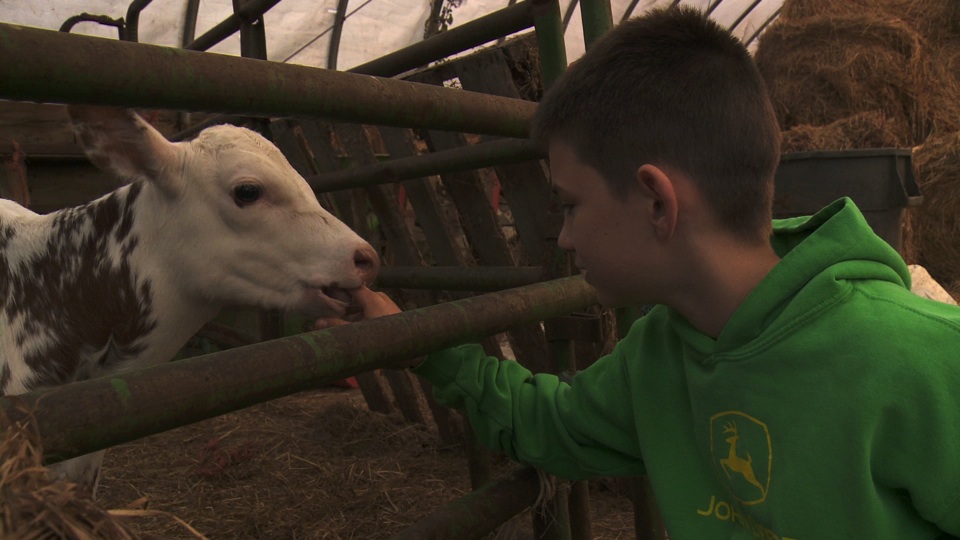 Early on Tuesday morning, August 7th, we accompanied Terri Lawton as she transported three calves and a steer to a slaughterhouse out of state.  It was about a 50-minute drive. It was fascinating to watch Terri and her father set up a gated pathway from the barn to the trailer. The efficiency with which they worked made it obvious that they had done this many times before. After the gate was secure, Terri gently nudged the calves out of the barn, and since the trailer had a nice supply of fresh hay, they climbed on board without a moo! Terri’s delightful 10 year-old son Joseph was added help throughout the morning.  He has a healthy understanding of his mother’s dairy and veal business, and even explained to us that this newly born girl would be beef at the end of her milk-giving career. Some might say that this is being desensitized, but I would argue that it’s actually being sensitized. Sensitized to one of many of life’s contradictions and paradoxes. Sensitized to life and death being cyclical and reciprocal. Sensitized to being connected rather than oblivious to the origins and processes involved in one’s food supply. Sensitized to that fully human feeling of being happy and sad at the same time instead of forcing contrary emotions into false or arbitrary compartments. Watching this calf suck Joseph’s finger can bring out such nuanced reflections. . . For some reason Terri’s rearview mirror ornament made a lasting impression on the way to the slaughterhouse.  Perhaps this also reflects the courage to hold two conflicting ideas in one’s mind and heart at the same time. Peace and violence. And while some in the meat industry might take issue with the connotations inherent in the word violence, slaughter is violent. It has to be. But the violence of it doesn’t in itself make it immoral. The word violent is actually from the Latin – violentus – which means strength. The literal definition of violent is “something that involves extreme force or motion.” The word itself is morally neutral. After we arrived at the slaughterhouse, we waited for a while in the parking lot until there was a space to pull the trailer up to the holding pen outside. It was a busy morning, and several trailers were ahead of us. As we peered in at the calves at this point, they were still quite unaffected, even after a long drive. One could probably say, “If they only knew what was about to happen. . .” But they don’t know. Is not knowing really so bad?  In terms of animal welfare, they had neither stress, nor fear, nor pain. In regard to animal rights, that’s another discussion in another context. When it was our turn to unload, the calves were very, very happy to get out of the trailer. These little guys can really move! And of course there was a lot of water waiting for them to drink on this rather warm morning. But while the calves were very fast and agile getting out of the trailer, the steer was quite wary about taking a step up. He had never seen a concrete step before, and didn’t quite know how to negotiate that challenge.  The scene reminded me of when I brought my adopted, retired greyhound home on that first day. He had never seen steps either, and I had to literally place each one of his four feet in front of the other to get him up the stairs. With a 1200-pound animal, it’s a different story, so we had to coax him out of the trailer with a grain bag! When all of the animals were out of the trailer, the last order of business for the morning was to explain the order of meat cuts and what organs were wanted back. While I’m still not used to talking about loin chops, shoulder steaks and ground meat from a still live animal, it’s all in a day’s work for Terri.  This is how she makes a living and she has to know by looking at the conformation of live animals, what kind of meat cuts can be derived from them. Before we left, I stood and took one last look at the calves. This one, the one who took pleasure in chewing on my shirt a couple of weeks ago, was the one who looked back at me.  Coincidence, perhaps. But I’m a sentimentalist and felt a pang of sorrow saying goodbye. The next time I see him will be when he is back at Terri’s Farm in a variety of packages. She will know which packages are him. And I will buy some of the meat and think about him honorably and thankfully when I eat.  So many people don’t want to know the animals on their plates. They would rather sustain the disconnect and the anonymity. I used to, but now that I know how it feels to embrace the wholeness, I won’t feel right to eat from a nameless, faceless, cellophane package of meat. At the very, very least, I now need to know which farm it is from. . .