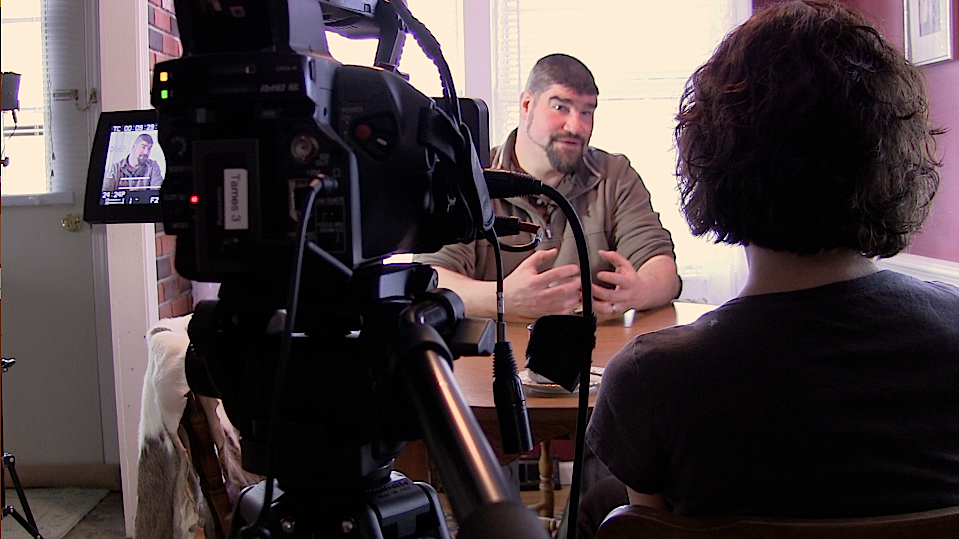 On March 12th, 2013, Eric Shelley, instructor of meat processing at SUNY Cobleskill who is featured prominently in Farm and Red Moon, came to visit us at Audrey Kali’s house to talk about the film.

Audrey was happy to be able to show Eric the hide she had tanned from the lamb slaughtered on his farm in October of 2011. She also got a chance to show him her study where she does a lot of her research on humane slaughter issues. Seeing Eric in the context of her home was a refreshing change from seeing Eric at his farm or meat processing lab. Eric and Audrey sipped coffee in her dining room, and Eric explained how he showed some clips of the film to his students in his meat processing certificate class, and how two of the Muslim students were excited to see that halal slaughter is included in the film. Eric stresses to his students that the film is trying to help people see what goes on behind slaughterhouse walls, especially since most people don’t really know what happens.

As Eric says, “It goes back to the fact that in the past 30-40 years, we have, as a society, become separated from where our food comes from. We put up concrete walls so that people don’t see. All they see is the final product. And they’ve got the images of chickens out running around in pastures and crowing at the sun. Eric also conveyed that he liked the idea that someone who wasn’t raised in farming is doing the film. He and his family were raised around farm animals and understand that animals are raised for meat, and when the animals pass, they are meat. However, he wonders about Audrey being sheltered from it for all those years, and if looking at it all of the time now is affecting her in adverse ways, causing many sleepless nights.

He noted that the students in his class wondered, “Why is she so wound up about this thing? Was this a surprise to her that this was going to happen?”  Eric explained to his students that Audrey willingly stepped into the role of being around it all of the time, and then on top of that was spending a lot of time reviewing the footage.  He explained that Audrey has been dwelling on it.

But, as Eric expressed, in his profession, one does not dwell on that moment. As Eric said, “I think about the moments before, and how much the farmer has given them the best possible life that they can have” instead of dwelling on those couple of seconds when the animal may have felt some pain. He said, “All of those seconds before, it was in bliss with the way it was raised; it was healthy, doing what it wanted to do.”

Eric also told Audrey that it is important to make Farm and Red Moon for people who haven’t had the experience that his children have have witnessing the full cycle of life and where their meat products come from. He said that through the course of making this film, he has come to realize that people need an accurate view of where meat comes from, what goes into it, and what happens to it, before it makes it to our plates. He believes that in order for people to make an educated decision about whether to consume meat and what kind of meat to consume, they need to understand the process of slaughter.

And he stresses that “we do everything we can to make it happen right.” Eric explains how he teaches captive bolt stunning to his students. Audrey shows Eric the print of Chagall’s Farm and Red Sun which inspired the new title of the film.