Fencing and Farming with the Shelley Family 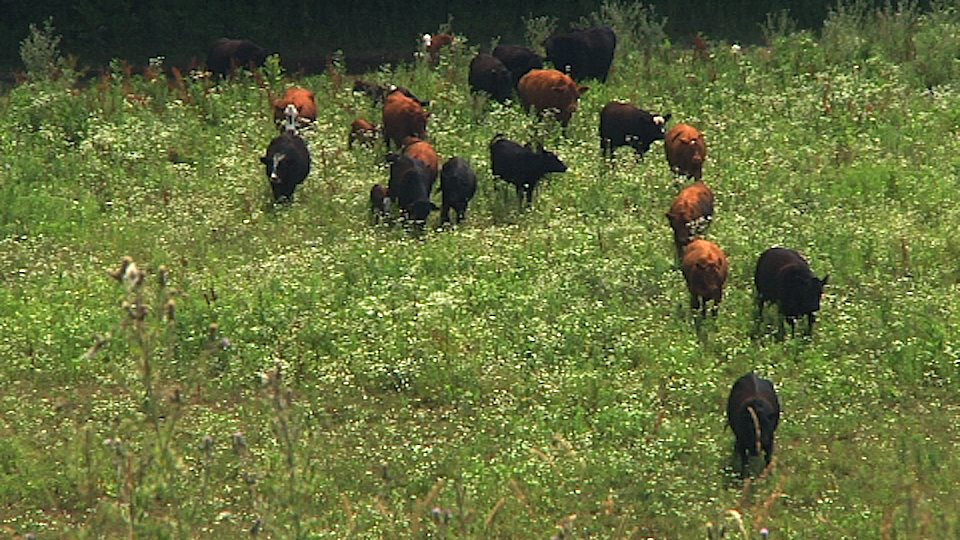 We visited Eric Shelley and his family on his farm in Cobleskill, New York, on July 14th 2012.  We wanted to learn more about what he does when he is not teaching students about humane slaughter, cutting and packing. On this very hot July Saturday, the main task was to put up new fencing for the lambs and sheep, and move them to another pasture.  This daunting task was performed by Eric, his wife Melissa, his sister Cindi, and his sons Beau (age 4) and Duke (age 2). Eric’s farm is absolutely gorgeous, with the quintessential and iconic (yet unusable) silos framing the scene. Somehow, a farm doesn’t appear to be a farm unless it has a red barn and at least one silo! It is quite the shift in perspective to see Eric working with his family on this farm after spending so much time watching him harvesting cows, pigs, goats and lambs in the Meat Lab at SUNY Cobleskill. But death and life are not as much opposites as they are reciprocal. Seeing how Eric cares for his animals on the farm is surely a vote of confidence for how he is with them in the slaughterhouse. And this version of animal husbandry has surely rubbed off on his sons! To say that Duke and Beau are fond of these animals is an understatement. Yet their fondness is not tarnished by their knowledge that these animals are raised to supply humans with food (milk or meat). It’s obvious to us that Eric, Melissa and Cindi take the time to explain all of these “facts of life (and death)” to Beau and Duke.  Perhaps shielding children from the origins of meat and milk creates neurotic adults rather than well-adjusted omnivorous citizens. It’s quite delightful to watch Eric with his sons as they traverse the dangerous terrain of the barns! One of the high points of the day was to put goat milk into a cup – directly from the goat’s teat – and drink it at it’s delectable 102 degree temperature.  It’s amazing how easy it was to do, after never ever doing it at all – being both an urban and suburban dweller. Duke, in his wise two years of life, was sure to be right there and assure that everything was being done correctly. In addition to being supervised by Duke in goat milking, Beau was sure to teach me all about the goats in the pasture. These animals are bigger than he is – yet not a fiber of fear is on this child! As fascinating as the goats and lambs were, seeing the cows and calves took on an entire different dimension. Beef is such a mainstay of our culture, and seeing these “beef” animals in their natural and nurturing environment was breathtaking. They are lucky to have Eric, Melissa, Cindi, Beau, and Duke as their custodial humans. What a sight it was to see these cows and calves jogging across the pasture when called to get some water at the other side of the farm. I guess I never saw, or even thought of a cow having twins, but since I am the mother of twin daughters, seeing this cow with twin calves was absolutely amazing.  She seemed to handle it all in stride. Seeing calves being able to nurse with their mothers in this “beef” herd was quite different than seeing the calves that were not able to nurse with their mothers on Terri’s dairy farm. But this difference does not appear to be better or worse — it is only different. Terri’s calves are healthy and happy and are content to be bottle-fed.  I guess at this point it’s important not to anthropomorphize.