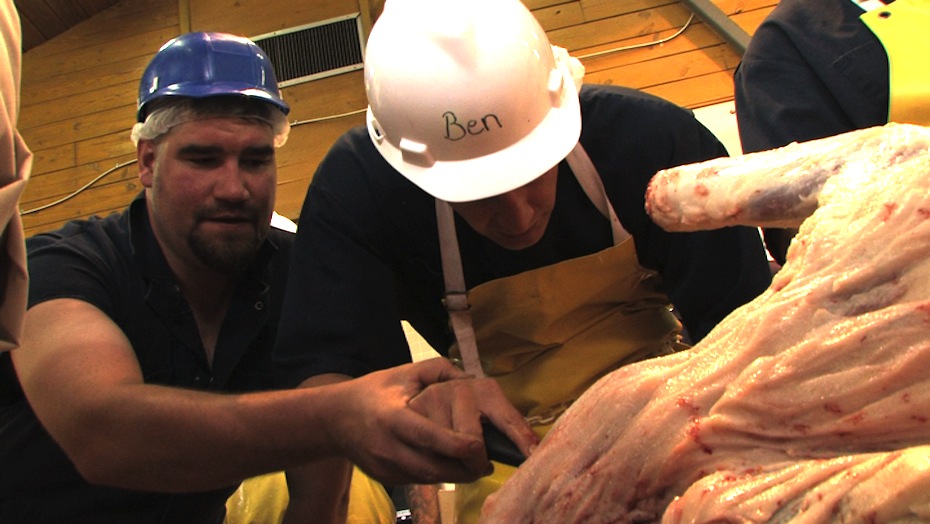 Pigs were the last animals on the slaughter list for students at the Meat Lab. We’re usually accustomed to thinking of pigs as pink, so it was quite interesting to get to know these black, hairy pigs before they were slaughtered.  They were quite curious and friendly, and were very large (about 400 pounds). It’s still hard to watch an animal being disassembled even when you know that it’s dead and can’t feel anything.  It gets easier to observe the less it looks like an animal and the more it starts to look like a meat carcass. All in all, though, I’m glad to have observed that the instructors and students treated both the live animals and carcasses with careful regard.  I never got the impression that they were working with factory objects. They were making it possible for animals to become our food and to do so humanely and safely. Eric Shelley spends a lot of time with each student, showing them how to cut into the carcass. He often guides their knives with his own hand so they can get the feel of how to do it the correct way. I thought that watching this evisceration would be upsetting and nauseating, but it was really rather interesting since a pig’s organs are so similar to our own.  Eric Shelley took a lot of time teaching the students about each of the organs and how to remove them.