Sausages and a Turning Point 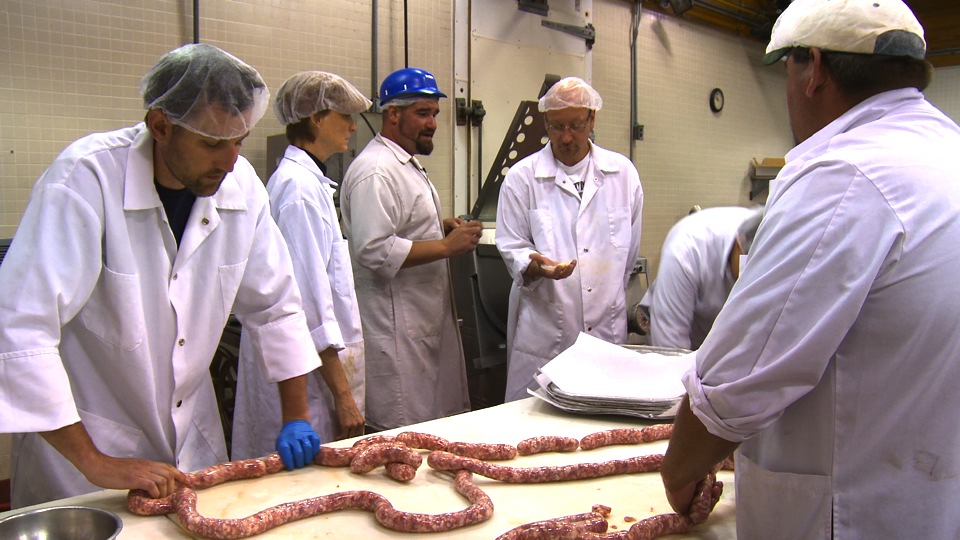 Perhaps the ultimate metamorphosis is for an animal to go from being a living being to being a sausage. Nothing about a sausage looks like flesh or bone. But Eric Shelley tells us that “we can’t stop thinking about the fact that this was once a living being four days ago.” A pig. A pig that is now sausage. Perhaps we started this film thinking that the meat industry necessarily disconnected from the animal origins; however, today we learned that this is far from the reality. All of the students we spoke with were sincerely cognizant of the fact that the contents of the sausages were once living animals and that these animals are now part of human nourishment. The makers of meat, whether local and small or commercial and large (truly a false binary), all share a common understanding of the transition of animal to dinner plate.  It’s the consumers that need to embark on a similar journey to this transparency of what is entailed in making meat protein available for human nutrition. Moral arguments of vegetarianism and veganism aside, we reflect on the people and institutions that consider the animal in the plastic-wrapped package, and for that animal to deserve a painless death. Local, small-scale, regional, industrial, commercial, and any other terms that create false segmentations in the meat industry, create a fog over what we need to explore: What is it that we can do to alleviate the suffering of animals when they are harvested for meat?  That being said, seeing how sausage was made at the SUNY Cobleskill Meat Lab was quite the experience! One thing about sausage is that it enables us to use parts of the animal that otherwise wouldn’t be desirable as prime meat cuts.  We hadn’t expected to think of sausage as respectful in terms of the animal it came from, but it really is!  Using every last bit is commendable. And although it was hard for us to wrap our minds around the fact that pig parts were being stuffed into pig intestines (for the casing), there is something noble about confronting that fact head on. The pig intestines are pre-ordered from a company in Pennsylvania that places them in red plastic devices to make them easier to work with. We were quite amazed to feel the tissue of these intestines, which is remarkably strong and resilient. It was quite fascinating to see the sausage coming out of this device tightly packed in the casing (intestine).  Even more remarkable was that we were all able to talk about the pigs that were harvested for this sausage. These students who were grinding this meat and making this sausage, all participated in the slaughter of the pigs. There was no disconnect at all. Looking more closely, you can see the tightly packed meat and the strength of the intestinal casing. Another highlight of our day was to show a work sample of Abattoir Rising to Eric Shelley and the Meat Lab students. Being able to hear their comments, questions, and concerns enables more understanding through collaboration. We were honored to be there with them to hear their thoughts.