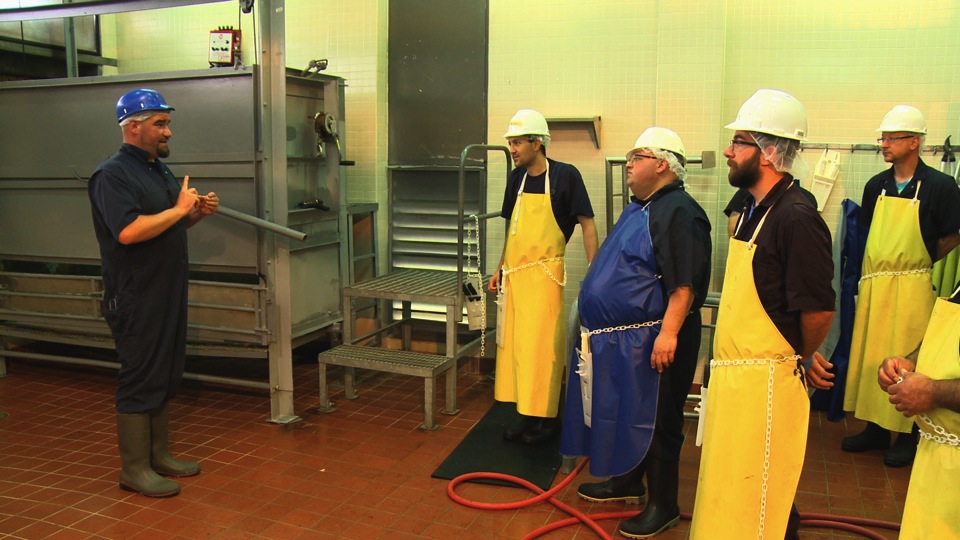 David and I visited Eric Shelley at the SUNY Cobleskill Meat Lab again today and learned more about humane slaughter. He spent a lot of time explaining to his students how to determine if a stun has been done correctly and if an animal has lost consciousness. We had never seen the slaughter of goats before and hadn’t even considered that this process is quite common in the United States. Of course one can’t just go to the supermarket and readily purchase a package of goat meat.  But since goat cheese and goat milk have become so popular, it makes sense that unusable male goats and older female dairy goats would ultimately be processed for meat. Eric showed us the goats in the holding pen that were waiting to be slaughtered. Since the kill box at SUNY Cobleskill is designed for larger animals (cattle and hogs), the goats were stunned outside of the box. Eric straddled them so they would be secure while a student proceeded with the captive bolt gun to stun them prior to being bled out. It’s amazing how quickly everything happens. After working on this film for almost two years, we had never seen electrical stunning. Today at the Meat Lab they needed to stun a pig electrically because the customer wanted to roast the pig whole with the head still attached. Stunning with a captive bolt gun would, of course, damage the head. Electrical stunning is very effective with pigs, as we understand, and Eric did a fine job rendering this pig insensible to pain. When we had seen pigs processed before at the Meat Lab, the hides were removed. But since this pig was to be roasted with the hide still on, it was essential to remove the hair on the skin.  This entailed putting the pig into a scald tank to loosen the hairs.  We were impressed with how Eric and his students were respectful and gentle with the pig, even though it was no longer alive. After the scald and manually scraping the hair off of the skin, Eric applied a torch to remove all remaining small hairs. Every step of the harvesting process, from the time the animal comes off of the truck until the time the animal (now a carcass) is placed in the cooler, takes an extraordinary amount of knowledge, understanding, skill, and patience.  Programs like this one at SUNY Cobleskill are essential for training people who want to work in any facet of this industry.